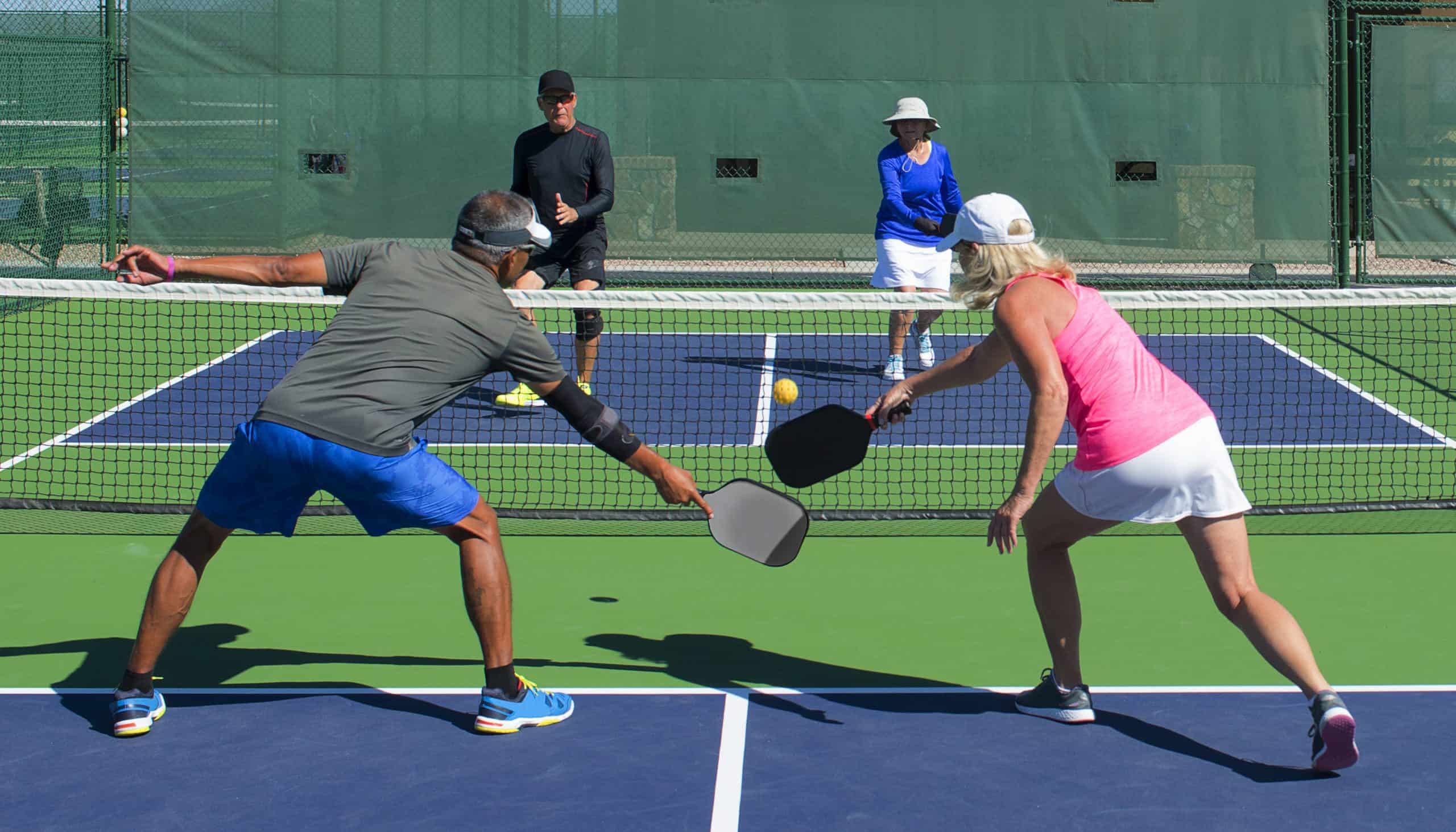 Pickleball is a sport that is gaining popularity at a rapid pace. You certainly have heard all the hype about it. It is so fun!

In this article, we will explain the basic pickleball rules to get you going so you can join in the fun!

Pickleball is a sport that is often heard before it’s seen and if you have played or watched the game you know what I mean.

Maybe you’ve heard the telltale plastic-popping sounds of a pickleball paddle connecting with a ball while walking through your local park, or maybe you’ve seen a fast-paced professional pickleball match while scrolling on social media.

Nowadays, it’s hard to not have heard of pickleball!

But what exactly is pickleball? What are the rules of pickleball? And how did it get its very unique name?

Keep reading for everything you need to know to play this incredible game.

Pickleball is a game that borrows from several different well-established sports: tennis, badminton, and ping pong. It was created in 1965 by Washington State congressman Joel Pritchard and his friend Bill Bell one summer afternoon. The two men had come home from playing a round of golf to find their kids bored out of their minds.

Pritchard and Bell quickly rummaged through all of the sports equipment in the Pritchard’s garage, finding a badminton net and no badminton rackets. So, they improvised with ping pong paddles and an old wiffle ball. After setting up the net, they handed the paddles to the kids and based the basic rules off badminton, and lowered the net to mimic the height of a tennis net.

That’s how, on a boring summer afternoon, pickleball was born.

Where Does The Name Pickleball Come From?

The story behind the sport’s peculiar name is a bit harder to track down.

The first tale that’s usually tossed around on the pickleball courts today is the Pritchard’s named it after their dog, Pickles. But those close to the family say the dog was named after the sport.

Other stories say that Joan Pritchard, Joel’s wife, gave the sport its name after she saw the combination of different sports equipment used to play the game. It reminded her of the pickle boat in crew where oarsmen were chosen from the leftovers of other boats.

The sport was incorporated in 1972 and by 1984 the United States Amateur Pickleball Association (now USA Pickleball) was formed. As stated earlier, it’s the fastest-growing sport in America and its popularity is due to its accessibility of play and how fun it is!

A wide range of skill levels, ages, and fitness levels are more than welcome onto a pickleball court or local clinic. It’s also relatively inexpensive to get started because all you need is a pair of pickleball shoes. Most clubs and recreation centers have paddles available to borrow until you figure out which is the best pickleball paddle for your game.

What Are The Pickleball Rules?

How the Game is Played?

Scoring and Announcing the Score

Faults are a rules violation that results in a dead ball and the end of a rally. If the receiving team faults, the serving team wins the point. A fault by the serving team means loss of serve. Here are a few of the most common faults in pickleball:

If you’d like to learn about all of the official rules, USA Pickleball has an online version of the 2023 rules.

The Court and Equipment

A pickleball court is one-third the size of a standard tennis court and is laid out according to the dimensions of a badminton court: 20 feet x 44 feet. The net divides the two sides of the court and stands 36 inches tall.

The non-volley zone extends several feet from both sides of the net, and the reason for having a designated non-volley zone is to take away the opportunity for smash volleys or drop shots. This allows the game to be more about careful shot placement rather than brute force or trick shots. And the non-volley zone adds another element to the fun, there’s nothing more satisfying than calling out the opposing team for stepping into the “kitchen.”

The pickleball paddle is smaller than a tennis racket and bigger than a ping pong paddle. Paddles are either made of wood or lightweight composite material which lends to the famous sound we all hear when nearing a pickleball court.

When pickleball was in its infancy, a standard wiffle ball was used. Now, with the standardization of the sport the International Federation of Pickleball and USA Pickleball have created guidelines about the type of ball used, including specific materials and dimensions. The ball still looks very similar to a wiffle ball.

Where Can You Play Pickleball?

Pickleball is, thankfully, everywhere. If you haven’t been seeing pickleball on the local courts in the park, there is a good chance you’ll find it being played at your local recreation centers or YMCA.

There are tons of local Facebook groups you can join, ask questions, and meet fellow pickleball enthusiasts. If you live in a pickleball hot spot, there might even be weekly socials where everyone gathers to play and have some drinks afterward. No matter where you live, there is bound to be a pickleball scene waiting for you. More and more tennis venues are adding pickleball. If you still aren’t sure, check out the USA Pickleball’s Places 2 Play.

How Do You Get Started Playing Pickleball?

The best way to get started playing pickleball is to find a group or pickleball club in your area. There are always people looking for new players, and they will be more than happy to help you get started.

You can also check out some of the instructional videos on pickleball rules and gameplay that are available online. Once you have a basic understanding of the game, you can pick up a paddle and start playing.

Pickleball is a great game for all ages and abilities, so don’t be afraid to give it a try. With a little practice, you’ll be serving, volleying, and drinking your way to pickleball glory in no time. We compiled a great list of the best pickleball paddle sets under $100 to get you started!

Pickleball is a sport that is growing in popularity. It is beginner friendly and accessible, making it a great choice for people of all ages. The rules are simple to learn, but the game can be complex and challenging. With pickleball being everywhere, there’s no excuse not to give it a try! So, Grab your paddles and your shoes because pickleball has something to offer everyone.